The Simpsons: Tapped Out Wiki
Register
Don't have an account?
Sign In
Advertisement
in: Characters, The Simpsons, Regular Characters,
and 11 more

Build the Playdough Factory (After Event)

Maggie is an ex-limited-time non-premium character in The Simpsons: Tapped Out, released during the Winter 2015 Event. She was first available on December 23, 2015, after completing the Oh Come, All Ye Vengeful questline. Since the beginning of Act Three, she is unlocked via the Play-Annoyed Grunt questline. She is not a limited-time character yet. To get her, you have to reach level 26, and then Marge will now have the Play-Annoyed Grunt questline. Simply build the Play Dough Factory, and you will get Maggie. You could have also gotten her on the Christmas Event of 2018, when you could make characters produce cookies in the quest "Christmas Doesn't Suck Suck".

Margaret "Maggie" Simpson (born January 14, 1987) is the youngest child of Homer and Marge, and the baby sister to Bart and Lisa. She is often seen sucking on her pacifier, and, when she walks, she trips over her clothing and falls on her face. Because she rarely ever talks, Maggie is the least seen and heard in the Simpson family. She also has a bow in her hair. 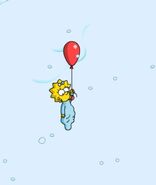 Maggie's mode of transport when sent on a mission. 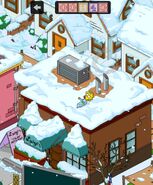 Maggie hiding on a rooftop. 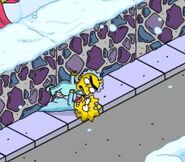 Maggie Simpson in the show
Community content is available under CC-BY-SA unless otherwise noted.
Advertisement