The Mafia Car is a decoration that was released on September 17, 2015, along with the Level 58 content update. Upon completion, the quest Frankie the Politician Pt. 1 is triggered, which unlocks Frankie the Squealer once completed.

Mafia Car is a car used by the Springfield mafia. 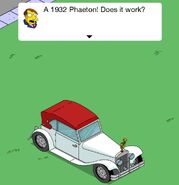 Add a photo to this gallery
Retrieved from "https://simpsonstappedout.fandom.com/wiki/Mafia_Car?oldid=198511"
Community content is available under CC-BY-SA unless otherwise noted.