Lyle Lanley is a non-permanent character appearing on August 11, 2015, during the Monorail 2015 Event. He is part of the first Act, and is a key character to starting the event.

Lyle Lanley is a con artist that sold project of monorails to several cities in order to leave town with the money before people find out that he sabotaged them. 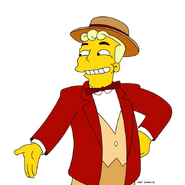 Lyle Lanley's artwork.
Add a photo to this gallery
Retrieved from "https://simpsonstappedout.fandom.com/wiki/Lyle_Lanley?oldid=255958"
Community content is available under CC-BY-SA unless otherwise noted.