The Simpsons: Tapped Out Wiki
Register
Don't have an account?
Sign In
Advertisement
in: Characters, Level 52, Non Premium Items,
and 6 more

Lunchlady Dora is a character released on May 6, 2015 with the Level 52 update. She is unlocked upon completion of the Springfield Slaughterhouse. 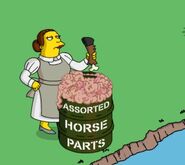