Lumpy was the school snake of Springfield Elementary. A green boa, Lumpy was quite accustomed to eating students from the school. According to the school charter, no teacher could be held accountable if the snake ate Milhouse. It also appeared to have eaten Todd. 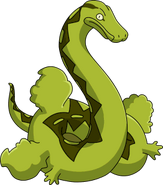 Lumpy in the show.
Add a photo to this gallery
Retrieved from "https://simpsonstappedout.fandom.com/wiki/Lumpy?oldid=186511"
Community content is available under CC-BY-SA unless otherwise noted.