Luke Stetson is a limited-time premium character released on May 03, 2016, as part of the Wild West 2016 Event. He is unlocked upon completion of the Hootenanny Barn.

He returned on February 12, 2018 during the Valentine's 2018 Promotion. He, along with the Hootenanny Barn was a possible prize in the Date Night Mystery Box.

He returned on August 1, 2018 during the Moe's Ark 2018 Event as a possible prize in the Zoo Gift Shop Mystery Box.

He returned on January 23, 2019 during the Love, Springfieldian Style 2019 Event once again as a possible prize in the Date Night Mystery Box.

Luke Stetson is Lisa's thirteen year old ex-boyfriend at the Lazy I Ranch. 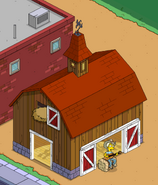 Luke Stetson Playing a Trail Song
Add a photo to this gallery
Retrieved from "https://simpsonstappedout.fandom.com/wiki/Luke_Stetson?oldid=229544"
Community content is available under CC-BY-SA unless otherwise noted.