Luann is a premium character released on November 7, 2013, along with the level 37 content update. She is unlocked upon completion of the Cracker Factory once the player has started Thrillhouse Pt. 1.

She was part of a deal with the Cracker Factory during the Black Friday 2015 Promotion.

Luann is the ex-wife of Kirk and the mother of Milhouse. She has been married to Kirk twice, getting divorced once, due to an argument that they had at Homer and Marge's dinner party. 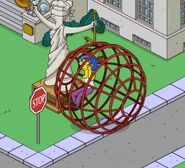 Luann riding in the Megaglobe. 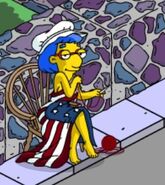 Luann dressing up in the flag.

Animation of Luann dressing up in the flag.

Luann relaxing in a jacuzzi suit.

Luann in her first appearance.

Add a photo to this gallery
Retrieved from "https://simpsonstappedout.fandom.com/wiki/Luann?oldid=252389"
Community content is available under CC-BY-SA unless otherwise noted.