Little Helper Ralph is a limited time costume for Ralph released on December 24, 2015, along with the Christmas 2014 Event. It was the sixth prize to be unlocked in the event's Part 2 prize track.

It was re-released as a premium item for the Winter 2015 Event; alone for 50 donuts, or bundled with the Toy Workshop for 75 donuts for those that didn't have it from the previous year, as a result, now earns at premium rate. 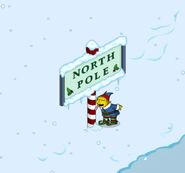