Lewd is a time-limited character released during the Treehouse of Horror XXVIII Event, as the first prize of Act 1. He's unlocked after placing Lewd's Bar.

Lewd is one of the three trolls, with Crawl and Barfy.

After being captured and enchanted, Lewd can be released from Lewd's Bar and after 4 hours, player gets: 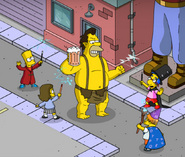 Lewd being captured by Wizard Martin and Magic Act Milhouse

Status: Enchanted
Add a photo to this gallery
Retrieved from "https://simpsonstappedout.fandom.com/wiki/Lewd?oldid=205978"
Community content is available under CC-BY-SA unless otherwise noted.