The Leprechaun has no jobs, but will reward the player with small amounts of XP or cash when tapped. Unlike the Yupprechaun, however, he does not do this when tapped by a visiting friend. After tapping, the Leprechaun will flee and cannot be tapped again until he resumes his normal state. As of the Whacking Day 2013 Event which started in April 2013, he will run away faster, therefore making him harder to tap.

O'Reilly the Leprechaun is a very small green leprechaun. He has shaggy eyebrows and a beard and is dressed all in green with a coatee (short jacket) and waistcoat, a bowler hat or canvas sailor's hat with a shamrock in the hatband, short pants and light- and dark-green-banded stockings, and dark green shoes with gold buckles. He always carries a white clay pipe in his teeth to complete the stereotype. 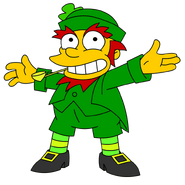 Leprechaun in Treehouse of Horror XII.

Catch the Leprechaun!
Add a photo to this gallery
Retrieved from "https://simpsonstappedout.fandom.com/wiki/Leprechaun?oldid=213009"
Community content is available under CC-BY-SA unless otherwise noted.