For other uses, see Tree (disambiguation).

Lemon Tree is considered by some to be the hardest decoration to acquire in the game. This is because it can only be won by a Mystery Box (discontinued). The player has a 6.2% chance of winning it in a Revised Mystery Box. Unlike other income generating items, when ready to collect it displays a basket of lemons instead of a wad of cash. It is the only income generating item in the game to display this when ready to collect. In 2012, the player had the ability to steal neighbors' Lemon Trees from their towns, and after 24 hours, they could steal it back. This feature was subsequently removed from the game later in the year, presumably EA did not like the idea of players stealing from their friends' towns. The Lemon Tree is from the Simpsons Episode Lemon of Troy.

“Lemon Tree is a famous historic lemon tree in Springfield.” 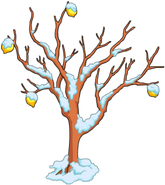 During the events of Christmas.

The Lemon Tree in the show 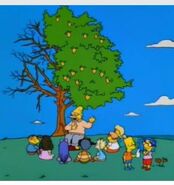 The current state of the Lemon Tree in the show
Add a photo to this gallery
Retrieved from "https://simpsonstappedout.fandom.com/wiki/Lemon_Tree?oldid=257291"
Community content is available under CC-BY-SA unless otherwise noted.