Lattes are Currency for the Springfield Heights Expansion. They are earned at the Coffee Shop, by spending 75000 at the Googolplex to air "Cafeblanca."

Lattes are used to buy different items at the store to use them in Springfield Heights, such as decorations and buildings. They are also used to upgrade buildings and are needed to be able to collect other currencies, i.e. Smart Devices and Pharmaceuticals. 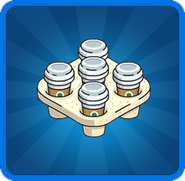 Lattes as Daily Challenge System Prize.
Add a photo to this gallery
Retrieved from "https://simpsonstappedout.fandom.com/wiki/Lattes?oldid=237064"
Community content is available under CC-BY-SA unless otherwise noted.