Larry Kidkill is a limited-time character that was released on August 1, 2018, as part of Moe's Ark 2018 Event. He is unlocked upon placing the Springfield Zoo Entrance, available at start of We Stole a Zoo Pt. 2.

Larry Kidkill is the owner of the Springfield City Zoo. He has signed The Nahasapeemapetilon Octuplets up to become an exhibit there when Apu and Manjula couldn't cope with being parents. The octuplets were put in a nursery at the zoo, where they were put on display in a show named "Octopia", several times a day. 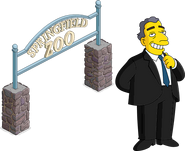 Larry Kidkill Open for Octopia.
Add a photo to this gallery
Retrieved from "https://simpsonstappedout.fandom.com/wiki/Larry_Kidkill?oldid=245686"
Community content is available under CC-BY-SA unless otherwise noted.