The Simpsons: Tapped Out Wiki
Register
Don't have an account?
Sign In
Advertisement
in: Buildings, Premium Items, Premium Buildings,
and 6 more

Put the D'oh! in Donut

Punching Holes Out of Donuts

Gluttony
The Lard Lad Donut Factory was a limited time premium building that was released on November 20, 2018, as part of the Black Friday 2018 Promotion. Upon completion, the quest Put the D'oh! in Donut was unlocked.

It was re-released as part of the Black Friday 2020 Promotion. 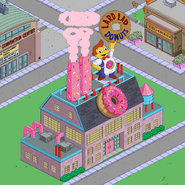