The Perfect Pitch
All My Sober Ladies

Lady Duff is a premium limited time costume for Duffman released on June 25, 2015, during the Tap Ball 2015 Event. She was part of the Soccer Cup 2015 and was unlocked upon completion of The Perfect Pitch.

Lady Duff is Duffman dressed in women's clothing in a disguise. He uses this alter ego to promote Duff Beer to women.

Lady Duff in the show 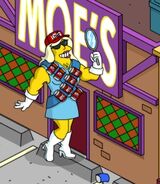 Lady Duff getting into character.

Toasting with Lady Duff.
Add a photo to this gallery
Retrieved from "https://simpsonstappedout.fandom.com/wiki/Lady_Duff?oldid=226724"
Community content is available under CC-BY-SA unless otherwise noted.