The Kwik-E-Mart Central Office (Hindi: मुख्य कार्यालय Central Office) is a limited-time premium building released on November 30, 2015, along with the Black Friday 2015 Promotion. It was offered on Cyber Monday for 145 donuts for 48 hours.

The Kwik-E-Mart chain was started somewhere in the Himalayas, where the world's first convenience store still stands on a mountain peak, an ironically inconvenient location. Visiting pilgrims are allowed to ask three questions of the resident all-knowing guru (except safe combinations). Apu's visit was spoiled by Homer's three questions, "Are you really the head of the Kwik-E-Mart?", "Really?" and "You?" The guru answered "yes" to all three of Homer's questions, and refused to answer any of Apu's, instead saying, "Thank you, come again."

The offer in the store for the Kwik-E-Mart Central Office. 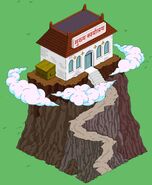 Gil's offer for the Kwik-E-Mart Central Office
Add a photo to this gallery
Retrieved from "https://simpsonstappedout.fandom.com/wiki/Kwik-E-Mart_Central_Office?oldid=241504"
Community content is available under CC-BY-SA unless otherwise noted.