The Saddest Town in America

Kumiko is a character who was released for free during the Married to the Blob Promotional in January 2014.

On January 31, 2017, during the Destination Springfield 2017 Event she was re-released as part of the Americatown + Sailor Kumiko Bundle.

Kumiko came to Springfield when she was touring around America's saddest towns and cities. She walked past Comic Book Guy's shop and saw him through the window and liked him. She came into the Android's Dungeon to purchase a copy of New Radioactive Man #1 and revealed to Comic Book Guy that she liked to draw manga and was drawing her life up, showing Comic Book Guy a panel in her comic, Coming-Of-Age Sad Happy Book. Comic Book Guy then gives her flowers in a Hulk hand.

Kumiko and Comic Book Guy get married in the Android's Dungeon, with Stan Lee officiating the wedding and the Simpsons, Mr. Nakamura, Milo, and Strawberry attending. 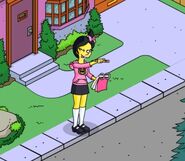 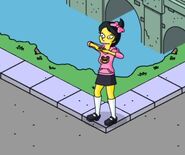 Add a photo to this gallery
Retrieved from "https://simpsonstappedout.fandom.com/wiki/Kumiko?oldid=257358"
Community content is available under CC-BY-SA unless otherwise noted.