The Lap of Luxury

Krusty Claus is a limited-time character that was released on December 9, 2020, as part of Act 1 of the Clash of Creeds: Christmas Royale 2020 Event. He was the third prize to be won in the event's Act 1.

Krusty Claus is a fictional character of Western folklore. In The Simpsons, his likeness has been emulated such as Homer Simpson and Krusty the Clown and his mythical entirety has also been shown. 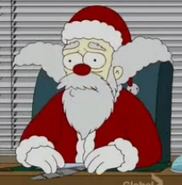 Krusty Claus In the Show.
Add a photo to this gallery
Retrieved from "https://simpsonstappedout.fandom.com/wiki/Krusty_Claus?oldid=256526"
Community content is available under CC-BY-SA unless otherwise noted.