Krusty's Retreat is a limited-time building that was released on September 11, 2019, as part of Krusty's Last Gasp Online 2019 Event. It was the sixth prize to be won in the event.

Lake Tahoe is a large freshwater lake located along the border between California and Nevada. Krusty and his lawyer are seen there at Krusty's Lake Tahoe retreat. 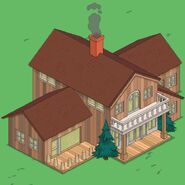 Krusty's Retreat's animation.
Add a photo to this gallery
Retrieved from "https://simpsonstappedout.fandom.com/wiki/Krusty%27s_Retreat?oldid=237467"
Community content is available under CC-BY-SA unless otherwise noted.