The Fat and the Futilest

King-Size Homer is a limited time costume released on November 19, 2015, during the Thanksgiving 2015 Event. It was the fifth and final personal prize that could be obtained in the event.

The outfit was available again during the Thanksgiving 2018 Event as a premium bundle.

Homer tries everything to get out of the plant's new exercise program and discovers that being on disability would do just that. With Bart's help, Homer starts eating everything he can, even playdough. 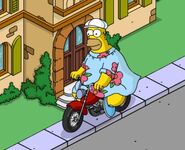 King-Size Homer letting it all hang out on the beach. 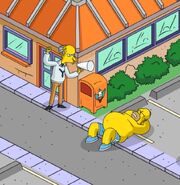 Mr. Burns whipping King-Size Homer into shape.
Add a photo to this gallery
Retrieved from "https://simpsonstappedout.fandom.com/wiki/King-Size_Homer?oldid=240209"
Community content is available under CC-BY-SA unless otherwise noted.