The Kill-E-Mart is a limited time alternative façade for the Kwik-E-Mart released on October 20, 2015, during the Treehouse of Horror XXVI Event Act 2.

The Kill-E-Mart is decorated with M'nthster themed elements. This includes the sign on the roof of M'nthster's head with numerous tentacles emerging from the side. Along the windows out front of the store are posters of monsters, and the side wall has pictures of M'nthster. The words "Kill-E-Mart" can be read on the sign above the store's entrance; the word "Kill" replacing "Kwik". 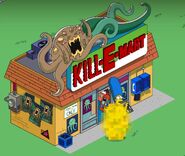 Marge having fun with cameras.
Add a photo to this gallery
Retrieved from "https://simpsonstappedout.fandom.com/wiki/Kill-E-Mart?oldid=193150"
Community content is available under CC-BY-SA unless otherwise noted.