part of Angelica Button and the Mystical Beasts

Kearneymon is a limited-time character released October, 3 2017 during the Treehouse of Horror XXVIII Event. It is unlocked after placing Kearneymon's Alley. He is a counterpart of Kearney.

Kearneymon has no own quest, but it's part of Angelica Button and the Mystical Beasts quest.

After being captured and enchanted, Kearneymon can be released from Kearneymon's Alley and after 4 hours, player gets: 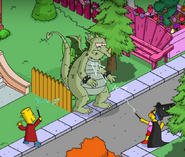 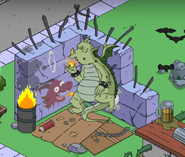 Kearneymon's unlock artwork
Add a photo to this gallery
Retrieved from "https://simpsonstappedout.fandom.com/wiki/Kearneymon?oldid=245603"
Community content is available under CC-BY-SA unless otherwise noted.