Kane Manor is a limited-time building that was released on March 24, 2015 as part of the Superheroes 2015 Event. It was the second prize of the Issue 4 of the event, obtained upon completing Monumental Battle Pt. 6.

It was upgraded to premium building status on June 14, 2016, when the Superheroes 2016 Event started and as a result players that had it from before started to benefit with premium payout from its income. It was re-released on July 8, 2016, during Issue 2 of the Superheroes 2016 Event, offered bundled with the Radioactive Man, the Bartman Cave and Bartman for 230 Donuts or alone for 55 Donuts for those players that already had at least one of the other 3 items. 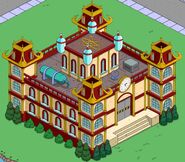 Add a photo to this gallery
Retrieved from "https://simpsonstappedout.fandom.com/wiki/Kane_Manor?oldid=205252"
Community content is available under CC-BY-SA unless otherwise noted.