This is about the costume. For the quest chain, see Kamp Bart (quest chain).

Kamp Bart is a costume for Bart that was added to the game when the Level 32 update was released. It is a premium costume, and is unlocked when Kamp Krusty is built, costing 200 donuts.

It was available as a prize on August 28, 2019, as part of Act 4 of the Simpsons Babies 2019 Event. Together with Kamp Krusty, they were the second prize to be won in the event's Act 4.

After being promised to see Krusty the Clown by the Kamp Krusty counsellors and instead given Barney in a Krusty outfit, Bart angrily leads a rebellion against the counsellors and takes over the camp with the other kids, acting as their leader.

The real Krusty eventually shows up and, apologising for how bad the camp had been, promises to take the kids to the happiest place on earth, Tijuana. 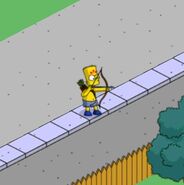 Kamp Bart Going on a Rampage. 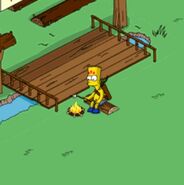 Kamp Bart Roasting Marshmallows.
Add a photo to this gallery
Retrieved from "https://simpsonstappedout.fandom.com/wiki/Kamp_Bart?oldid=237095"
Community content is available under CC-BY-SA unless otherwise noted.