Rebel Without A Pause

Jimbo is a premium character in the Toughies Character collection. He was made available to purchase for 120 donuts in October 2013. He does not have a voice actor.

James “Jimbo” Jones, Sr., also known as Jamesbo, Dr. J, and Hector Gutierrez, is one of the bullies at Springfield Elementary, with Dolph Starbeam, Kearney Zzyzwicz, Nelson Muntz, and the Weasels. He is a fifth grader. Jimbo is the second-in-command of the bullies, being the leader when Nelson isn't around, although Nelson has no interest in hierarchic systems. Jimbo is the tallest bully, and strongest.

Jimbo's Halloween costume during the Treehouse of Horror Events. 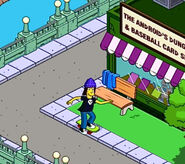 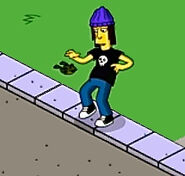 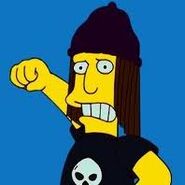 Jimbo in the show.

One of Jimbo's random level up messages.

Add a photo to this gallery
Retrieved from "https://simpsonstappedout.fandom.com/wiki/Jimbo?oldid=245662"
Community content is available under CC-BY-SA unless otherwise noted.