The Jet Engine Bike was a premium decoration that was first available during the Christmas 2013 Event in December 2013.

During the Cyber Monday 2015 Promotion the player got a refund (rebate) of 8 donuts when purchased but the base cost was 10 donuts more than the normal price.

During Wave 2 of the Corporate Kickbacks, the player got a rebate of 10 donuts after purchasing the item, while the base cost remained the normal 30 donuts. 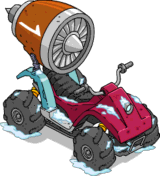 With snow in Winter events.

The Jet Engine Bike in the show
Add a photo to this gallery
Retrieved from "https://simpsonstappedout.fandom.com/wiki/Jet_Engine_Bike?oldid=241510"
Community content is available under CC-BY-SA unless otherwise noted.