Joy to the Weird

Jesus Christ is a limited-time premium character that was released on December 20, 2017, as a Gil Deal during The Invasion Before Christmas 2017 Event. He is unlocked upon the completion of the Heavenly Swing Set.

He returned on March 28, 2018 during the Resurrection of Rigellian Christ 2018 Promotion.

He returned on December 19, 2018 during A Simpsons Christmas Special 2018 Event as a possible prize in the Happy Holidays Mystery Box.

Jesus Christ is the son of God and Mary. God told Homer about the time Jesus was on earth and said "I don't know what you people did to him, but he's never been the same." God then pointed to Jesus, who was sitting on a slightly spinning swing with a look of grief on his face. He seemed traumatised and depressed. When Homer and Bart became Catholic, Marge dreamt of Catholic Heaven where everyone was cheering and throwing Jesus in the air. 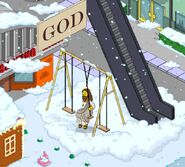 Jesus feeling sad that nobody remembered his birthday. 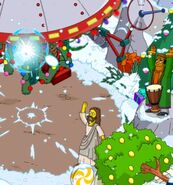 "Just a miracle even for them to have a world title. I'm going to officialize the one from 1951, that's the way." Translated from Portuguese to English for English viewers.
Add a photo to this gallery
Retrieved from "https://simpsonstappedout.fandom.com/wiki/Jesus_Christ?oldid=257363"
Community content is available under CC-BY-SA unless otherwise noted.