Incantation was a limited-time currency that was released on October 3, 2018 for the Treehouse of Horror XXIX Event. It was the only currency used in the Holy Forge to craft prizes for the event. Incantation was also used for upgrading the Flanders Family Tome.

Incantation could have been obtained: 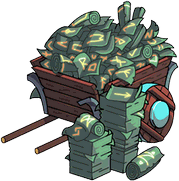 1000 Incantation Bundle as a personal prize.

Holy Forge Crafting Guide.
Add a photo to this gallery
Retrieved from "https://simpsonstappedout.fandom.com/wiki/Incantation?oldid=223785"
Community content is available under CC-BY-SA unless otherwise noted.