The Inanimate Carbon Rod Monument is a limited time premium decoration that was released on January 21, 2016, during the Deep Space Homer 2016 Event. It returned during The Marge-ian Chronicles Promotional.

The Inanimate Carbon Rod is a rod made of carbon. It was a component of the NASA Corvair space shuttle which Homer, Race Banyon and Buzz Aldrin were on. When Homer snapped the handle off the shuttle door, Banyon prepared to kill him, so Homer took the rod off the wall to smash Banyon's "pretty face" in. However, Homer unintentionally lodged the rod in the shuttle door, closing it and allowing Homer and the other astronauts a safe return to Earth. The rod received all the credit. It was featured on the cover of Time magazine with the caption "In Rod We Trust!". It was also given the main seat in the subsequent parade, much to Homer's annoyance, as he had been upstaged yet again by an Inanimate Carbon Rod. Homer then turned off the TV airing the parade, much to the chagrin of Bart and Lisa, who proclaimed "they were about to show a close-up of the rod!" 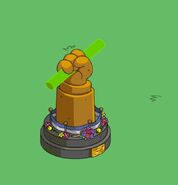 Inanimate Carbon Rod Monument in-game.
Add a photo to this gallery
Retrieved from "https://simpsonstappedout.fandom.com/wiki/Inanimate_Carbon_Rod_Monument?oldid=182869"
Community content is available under CC-BY-SA unless otherwise noted.