Ice Princess Martin is a limited time costume released on December 3, 2014 during the Christmas 2014 Event. It was to promote the upcoming Christmas themed episode on December 7, 2014.

He returned on November 29, 2017 during A Rigellian Christmas 2017 Promotion and on December 5, 2018 during A Simpsons Christmas Special 2018 Event as a possible prize in the Winter Wonderland Mystery Box. In the mystery box, he came with the Ice Palace.

*Will only appear if the player bought the Ice Palace. 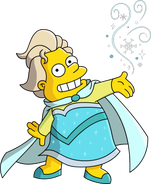 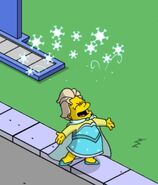 Ice Princess Marting singing his cares away.
Add a photo to this gallery
Retrieved from "https://simpsonstappedout.fandom.com/wiki/Ice_Princess_Martin?oldid=238205"
Community content is available under CC-BY-SA unless otherwise noted.