Allowing It To Go Away

The Princess Nerd
The Ice Palace is a limited time premium building that was released on December 24, 2014, during the Christmas 2014 Event. It was released to accompany Ice Princess Martin and be part of the I Won't Be Home for Christmas episode promotional. It was originally supposed to be released at the start of the event (December 3, 2014) but was cut in a December 5 in-game update. It was reinstated back into the game at the second phase of the Christmas update.

It returned on November 29, 2017 during A Rigellian Christmas 2017 Promotion as a prize in the Winter Wonderland Mystery Box.

It returned on December 5, 2018 during A Simpsons Christmas Special 2018 Event as a possible prize in the Winter Wonderland Mystery Box.

It was featured in the episode during the couch gag as part of a reference to the widely popular Disney movie, Frozen. 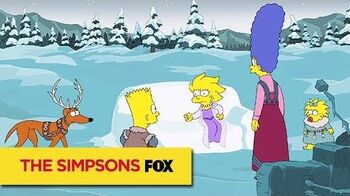 Add a photo to this gallery
Retrieved from "https://simpsonstappedout.fandom.com/wiki/Ice_Palace?oldid=238199"
Community content is available under CC-BY-SA unless otherwise noted.