The Homer's House of Cards is a limited-time building released on March 13th, 2016, as part of the Burns' Casino 2016 Event. It is free to build and a card minigame can be played for event and crafting currency.

The other two minigames in this event are Gaming Moe's and Cletus's Dice Den.

Playing cards is easy and fast:

Note: The game apparently does not produce the hands Flush, Straight, or Straight Flush.

For all outcomes, there is a chance of also receiving a bonus of two Keychains, Coasters, Martinis or Show Tickets.

The odds are an approximation based on 400 tries resulting in an average of 111.1 Chips per Game.

There is one way to cheat in this minigame, as indicated by the game itself. When cheating, the player receives the grand prize of 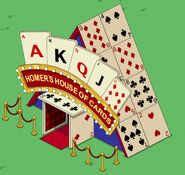 Homer outside Homer's House of Cards

Three of a Kind

Card cheating 2
Add a photo to this gallery
Retrieved from "https://simpsonstappedout.fandom.com/wiki/Homer%27s_House_of_Cards?oldid=225211"
Community content is available under CC-BY-SA unless otherwise noted.