It Ain't Easy Being Tie-Dyed

Hippie is a formerly limited time character released on August 23, 2015, during the Monorail 2015 Event. He was the tenth and final prize to be won in the Event's Act Two. He is unlocked upon completion of the Uriah's Heap Recycling Center.

He returned for the Dilapidated Rail Yard Expansion, where he became a permanent, premium character.

Hippie is the owner of Uriah's Heap Recycling Center. 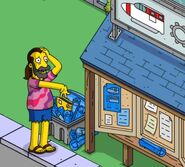 Add a photo to this gallery
Retrieved from "https://simpsonstappedout.fandom.com/wiki/Hippie?oldid=256767"
Community content is available under CC-BY-SA unless otherwise noted.