Rest From the Wicked

The Helter Shelter is a limited time building that was released during the Christmas 2013 Event. It was one of the prizes that could be obtained through the Holiday Wheel. It unlocks no characters upon building.

Homer and Ned came here to help the homeless. Homer annoyed Ned by becoming more popular than him. Moe also works here, reading to the homeless on Wednesdays.

Helter Shelter in the show 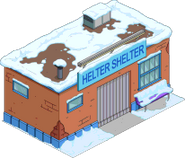 In game image of the Helter Shelter.
Add a photo to this gallery
Retrieved from "https://simpsonstappedout.fandom.com/wiki/Helter_Shelter?oldid=223949"
Community content is available under CC-BY-SA unless otherwise noted.