Obedience: +20
The Hellementary School is a limited-time premium building that was released on October 4, 2016, as part of Act 1 of the Treehouse of Horror XXVII Event. It rewarded the player with 175 MAG Points once built.

It returned again on October 3, 2018, during the Treehouse of Horror XXIX Event. It was a possible prize in the THOH Mystery Box.

Bart finds an Aramaic inscription on a desk. Lisa uses an app to translate it, which transports the pair to Hell, which is a school. Bart excels in the diabolical subjects and asks his parents if he can study there permanently. Bart succeeds in all of his classes in Hell. For his final test, he must torture Homer. Despite Bart's hesitation, Homer lets him. A disfigured Homer proudly watches Bart graduate as valedictorian. 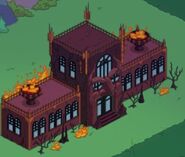 Hellementary School.
Add a photo to this gallery
Retrieved from "https://simpsonstappedout.fandom.com/wiki/Hellementary_School?oldid=226441"
Community content is available under CC-BY-SA unless otherwise noted.