Guts of War II: Entrails of Intestinox is a video game that Bart completes quite fast at the E4 Convention in the episode The Food Wife. A game developer claimed that the game would be near impossible to beat, but Bart was able to easily beat it, leaving the developer speechless. 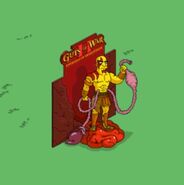 Guts of War Statue in the game.
Add a photo to this gallery
Retrieved from "https://simpsonstappedout.fandom.com/wiki/Guts_of_War_Statue?oldid=236134"
Community content is available under CC-BY-SA unless otherwise noted.