Homer's obsession with the TV show “Storage Battles” leads the family to discover Grampa’s past identity as “Glamorous Godfrey,” the most feared, villainous man in pro-wrestling history. What's more amazing, he was once revered by a young Montgomery Burns, who now convinces Grampa to get back in the ring. But when Bart starts to adopt some of his grandfather's former cheating ways, Grampa must reconcile with his past before it's too late. 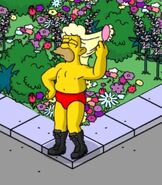 Gorgeous Grampa prancing and preening.
Add a photo to this gallery
Retrieved from "https://simpsonstappedout.fandom.com/wiki/Gorgeous_Grampa?oldid=244525"
Community content is available under CC-BY-SA unless otherwise noted.