Giuseppe's Workshop is a limited time building released with the 4th July 2014 Event. It returned on December 29, 2014 for the Christmas 2014 Event Part 2 as part of the New Year's Eve Quest. It was re-released for 95 donuts, and as such, it earns at a premium rate. It was also available during the 4th July 2015 Event. 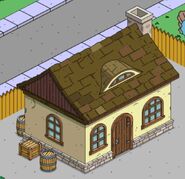 Add a photo to this gallery
Retrieved from "https://simpsonstappedout.fandom.com/wiki/Giuseppe%27s_Workshop?oldid=181461"
Community content is available under CC-BY-SA unless otherwise noted.