Gil Gunderson is a non-controllable character, (NPC) that randomly appears in the player's Springfield to offer the player special limited-time deals to encourage the purchase of Donuts. If Gil's offer contains items that cannot be purchased multiple times, like the Springfield Sign or the Volcano Lair, and if the player already possesses at least one of those items, Gil will not show in that player's town.

Gil Gunderson (usually referred to as Ol' Gil or simply just Gil) is an unsuccessful and unlucky businessman of Springfield. He once stayed in the Simpson's House.

"Celebrate consumerism with this holiday inspired theme park and tree!"

200, but would also include a free Holiday Tree, normally worth

"Celebrate the season with even more donuts!"

From December 23–28, 2012, the player would be offered another deal. This deal adds 25% more Donuts to the Donut bundles in the store. For example, the dozen Donuts (originally 12) became 15.

"Nothing says 'I'm in charge' like a giant super laser!"

On January 11–14, 2013, Gil would offer the player a combination of the Volcano Lair and the Springfield Sign for a value of

250, when normally to buy the two on their own would cost the player

"Who wouldn't want an awkward nerd in their town?"

From February 22–25, 2013, the player was offered a deal consisting of Frink's Lab, along with a Homer Buddha and an additional

"Here's some stuff that has nothing to do with Thanksgiving but you definitely want to buy anyway!"

On November 29, 2013, players were offered the Duff Brewery along with the Springfield Sign and

300, which would usually cost

"Holiday donuts...Get 'em while they are still appropriate to the season!"

"Get the Krusty Premium package...for some reason with Dr. Nick!"

From February 20–25, 2014, players were offered the Krustylu Studios with Sideshow Mel along with Dr. Nick and a Cannon for

200, which would normally cost

"Finally you can make all the other mansions you have look like junk!"

More Dough for Your Dough Edit

"Get more dough for your dough! Plus also... some other things!"

Back to School Edit

From August 13–18, 2014, Gil offered a new deal including Otto and the School Bus, Tetherball, Monkey Bars and See-Saw for

70. This would normally cost

140 for the premium items and

"Buy limited time sale items and get donut rebates right on the spot!"

From November 28 to December 1, 2014, during the Thanksgiving 2014 Event, Gil would sell one premium item for an hour with a rebate. The time between deals varied.  After spending the full amount, the player would receive a certain number of donuts back based on the cost of the item (at least 20%).

"Get your very own giant, robot dinosaur... Truckasaurus!"

On December 1, 2014, following the Black Friday 2014 sale was Cyber Monday. On Cyber Monday the Truckasaurus was offered for 225 donuts.

“Get your life-sized Castle of Equalia, complete with a Queen Helvetica outfit for Lisa!”

On January 15, 2015, after the Christmas 2014 Event, Gil offered a deal for 175 donuts which gave you The Castle Equalia and Queen Helvetica Outfit for Lisa.

“The most epic fail of automotive history — get yours today!”

On March 11, 2015, during the Superheroes 2015 Event, Gil offered a deal for 82 donuts which gave you The Homer, a premium decoration that gives a 3% bonus to players.

"Kissing Irish things hasn't helped Gil out much, but I'm sure you'll have better luck!"

"He works hard, he plays hard! Get Roscoe and the Steel Mill today!"

From June 12–15, 2015, during the End of School Promotion 2015, Gil gave the player the possibility to purchase several premium items while getting back some of the Donuts required to buy them. Each item was only available for 24 hours. Once a new day started, the items from the previous one couldn't be purchased anymore. This also applied for the permanent items, as they were removed from their usual categories in the store for the duration of the sale.

“Curious to hear Nixon’s side of the story? Grab him today!”

"Get your summer treats here! Limited time only!"

“New Oktoberfest deals each day! Plus get beer-absorbing donuts back with every purchase!”

From September 30 to October 6, 2015, during the Oktoberfest 2015 Promotion, Gil gave the player the possibility to purchase several premium items while getting back some of the Donuts required to buy them. Most of the items were only available for 48 hours.

"Get a classy place to conduct dark business with ancient entities, for a limited time only!"

"Limited-time deals every hour! Get donuts back with every purchase! This can't go wrong for Ol' Gil!"

From November 27 to 30, 2015, during the Black Friday 2015 Promotion, Gil offered dozens of premium items with the guarantee that donuts would be returned after the purchase, and each item was only available for an hour, although they did repeat. The final item offered was a new item.

"Get your own little scene of Winter happiness now!"

"Get you tailgate party going for the Supe--er, Big Game. I said Big Game. Whew, close one!"

From February 4 to 9, 2016 during the Big Game Supplies 2016 Promotion, Gil offered a new premium decoration, the Tailgate, for 200 donuts.

"Add a little meat to your Springfield with Der Krazy Kraut."

"This Irish brawler is all about unification. What could go wrong?"

From March 16 to 20, 2016 during the St. Easter 2016 Event, Gil offered a new building, Notre Dame of Springfield, that came with Groundskeeper Seamus for 150 donuts.

“Gil's got a bunch of great deals in honor of the start of the allergy season!”

From April 13 to 19, 2016, during the Spring Cleaning 2016 Promotion, Gil gave the player the possibility to purchase several premium items while getting back some of the Donuts required to buy them. Most of the items were only available for 48 hours.

"Stir things up in Springfield with a whole stronghold of hoodlums!"

From August 23, 2017 during the Homerpalooza 2017 Event, Gil offered a new set of Praiseland attractions, walls, gate and green, together with Rachel Jordan, for

From October 9, 2017 during the Treehouse of Horror XXVIII Event, Gil offered a new character, Burns Dragon, and his Pile of Treasures for

"Purchase Jesus" He is the reason for the season!"

From December 20, 2017 during the The Invasion Before Christmas 2017 Event, Gil offered a new character, Jesus Christ, and his Heavenly Swing Set for

From January 31, 2018 during the Act 1 of the Bart Royale 2018 Event, Gil offered two new characters, Sam and Larry, and Moe's Express for

"Get Jack the Ripper and Scotland Yard!"

From April 9, 2018 during the Act 2 of the The Springfield Jobs 2018 Event, Gil offered a new character, Jack the Ripper, and the Scotland Yard for

"Get Sarah Wiggum and Springfield Aquarium!"

From August 17, 2018 during the Act 2 of the Moe's Ark 2018 Event, Gil offered a new character, Sarah Wiggum, and the Springfield Aquarium for

300, as part of the Sarah Wiggum Promotion.

"Balance your religious deities with The Devil himself!"

From October 12, 2018 during the Act 1 of the Treehouse of Horror XXIX Event, Gil offered a new character, The Devil, and the Hellscape for

199, as part of the Treehouse of Horror XXIX Promotion.

"Get ready to roll with a radical blast from the past – Young Marge!"

From December 12, 2018 during the Act 2 of the A Simpsons Christmas Special 2018 Event, Gil offered a new character, Young Marge, and the Roller Rink for

199, as part of the A Simpsons Christmas Special Promotion.

"Get ready to bring another star to Springfield - Vicki Valentine!"

From January 23 to January 30, 2019, during Act 1 of the Love, Springfieldian Style 2019 Event, Gil offered a new building, Vicki Valentine School of Dance that came with Vicki Valentine for

"Get these fine boys, before they grow up into big jerks!"

From August 7 to August 14, 2019, during Act 1 of the Simpsons Babies 2019 Event, Gil offered a new decoration, Moe's Express Lemonade, and 2 characters, Baby Barney & Baby Moe for

"The doors of the Lord's house are open for you."

From February 23 to March 12, 2020, during Act 3 of the Black History 2020 Event, Gil offered a new building, Mega Church that came with The Patriarch for

"Haircuts from 9-5, Wrestling after 6 and most weekends."

From April 26 to May 13, 2020, as part of Act 3 of the Simpsons Wrestling 2020 Event, Gil offered a new building, Beefy Bishop's Barbershop that came with The Beefy Bishop for

Gil's unlock artwork can be found in the games files. 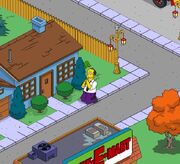 Gil begging to the player.

Gil during the Thanksgiving Event Offer.

One of Gil's quotes.

One of Gil's random level up messages.

Gil's deal for the Homerpalooza 2017 Event.

Gil's deal for the Treehouse of Horror XXVIII Event.

Gil's deal for The Invasion Before Christmas 2017 Event.

Gil's deal for the Pride 2018 Promotion.

Gil's The Devil deal for Treehouse of Horror XXIX Event.