The Giant Screamapillar is a limited-time NPC premium character that was released on June 7, 2017, during the Time Traveling Toaster 2017 Event.

The Screamapillar is an endangered species that takes residence in a Koi Pond in the Simpson family's backyard. It is large and red and is similar to a caterpillar. 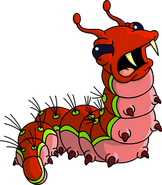 Giant Screamapillar in the show.
Add a photo to this gallery
Retrieved from "https://simpsonstappedout.fandom.com/wiki/Giant_Screamapillar?oldid=250634"
Community content is available under CC-BY-SA unless otherwise noted.