Ghosts are limited time popable characters which were added to the game with the Treehouse of Horror XXIV Event in October 2013. When a ghost is tapped by the player, they will receive GOO, and in some cases the player will also receive a Gremlin to place in a friend's Springfield, and on even rarer occasions, one donut may be found.

Extra ghosts can be gained if you have the Pet Cemetery, Mausoleum, Springfield Cemetery, Ancient Burial Ground, Wailing Wall, or the Freakmobile.

The Frightems were collected by logging on daily and popping Ghosts. 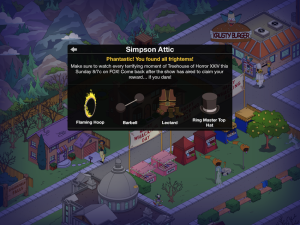 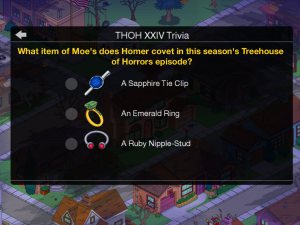 "A flaming hoop! I better save this in case someday I get poodles that want to jump through things."

"This barbell will come in handy if I ever have two side-by-side stacks of giant paper that I need to stop blowing away."

"This leotard will be great for attending classes of that new exercise I invented…Pie-lates."

"A circus Ringmaster’s hat. This will be useful next time I need to boss around an acrobat."

On Sunday, players who collected all the items had to answer a trivia question: “What item of Moe’s does Homer covet in this season's Treehouse of Horrors Episode?” and choose the correct answer: An Emerald Ring.  Answering the question correctly gave the player the Homer Strongman costume and, if they did so on the first attempt, ten free Donuts.

There are 3 ways to get rid of ghosts. The first method was available at the beginning of the event while the other two had to be unlocked. 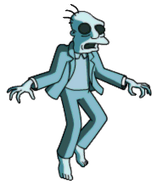 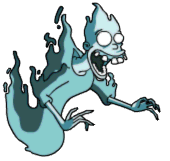 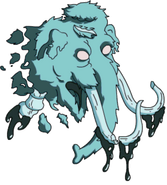 Mastodon Ghosts
Add a photo to this gallery
Retrieved from "https://simpsonstappedout.fandom.com/wiki/Ghosts?oldid=180725"
Community content is available under CC-BY-SA unless otherwise noted.