George Washington is a limited-time premium character that was released on July 2, 2014, as part of the July 4th 2014 Event. He is unlocked upon placement of the Ye Olde Cherry Tree, and is the second real life president to be added to the game. He returned for all subsequent 4th July events.

George Washington was the first President of the United States and the enemy of Hans Sprungfeld, a.k.a. Jebediah Springfield. They shared a brief, but intense fist fight where Jebediah almost killed him and ruined a part of a portrait being done of him. George Washington was forced to use his fake teeth to pinch Jebediah but stopped fighting after intervention from Betsy Ross, who was making a U.S.A. flag. 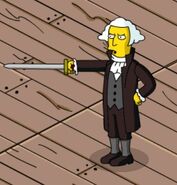 George Washington trying to cut down a cherry tree.
Add a photo to this gallery
Retrieved from "https://simpsonstappedout.fandom.com/wiki/George_Washington?oldid=251939"
Community content is available under CC-BY-SA unless otherwise noted.