Battle of the Quick Wit Brits

Geoffrey Chaucer is a limited-time premium character that was released on April 6, 2018, as part of The Springfield Jobs 2018 Event. He is unlocked upon the completion of Westminster Abbey. 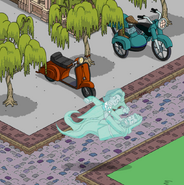 Geoffrey Chaucer Searching for Money.
Add a photo to this gallery
Retrieved from "https://simpsonstappedout.fandom.com/wiki/Geoffrey_Chaucer?oldid=251920"
Community content is available under CC-BY-SA unless otherwise noted.