Once Upon a Time in Springfield Pt. 3

The General Store is a limited-time building released on April 19, 2016, as part of the Wild West 2016 Event. It was free to build and was the hub where trades took place for event prize currency.

General Store is a shop in Springfield. Abe and Jasper were sitting outside of the shop when the air raid siren blew in Bart's Comet.

On every act, players were given the daily possibility to hand in a certain amount of trades to unlock a prize (except the first day, where 2 prizes were available).

There was a daily cap of what one could earn with the General Store trades. Upon reaching it players were not able to hand in trades until the next day. This cap only applied for the currency earned from trades and players were also still able to collect currencies through other means during the current day. 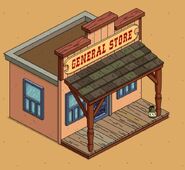 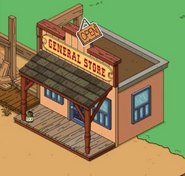 Add a photo to this gallery
Retrieved from "https://simpsonstappedout.fandom.com/wiki/General_Store?oldid=186449"
Community content is available under CC-BY-SA unless otherwise noted.