Prelude to a Powermove Pt. 5

Gelatinous Homer was created when Marge and Homer were having a date in there backyard and a meteor crashed in their yard. immediately after, Bart, Lisa and Maggie ran out and started inspecting the meteor. despite Lisa's warnings, Homer ate the goo in the meteor, turned green and started eating people. After Marge was able to calm Homer down, he asked if there was any way that he could be a positive for the community. The next day, Mayor Quimby is standing in front of a homeless shelter and tells all the homeless people to go in. It turns out the building was a sham and Homer would immediately devour the homeless people. 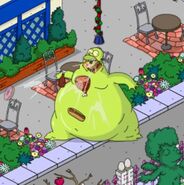 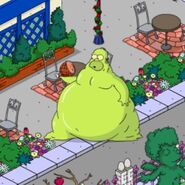 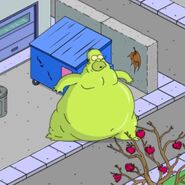 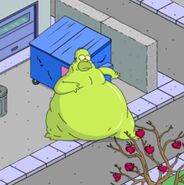 Gelatinous Homer Going On Hunger Rampage (2).
Add a photo to this gallery
Retrieved from "https://simpsonstappedout.fandom.com/wiki/Gelatinous_Homer?oldid=256146"
Community content is available under CC-BY-SA unless otherwise noted.