Gabbo and Arthur are a limited-time pair of characters released on March 17, 2016 as part of the Burns' Casino 2016 Event. They were the fifth and final personal prize in the event's Act 3.

Gabbo is Arthur Crandall’s ventriloquist dummy. Together, they were a short-lived, although enormously successful, ventriloquist/dummy duo for children's TV in Springfield. 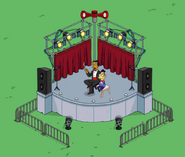 Gabbo and Arthur having a Conversation with "Himself" at the Open Air Stage.

Arthur having a conversation with himself

Gabbo and Arthur in the show.
Add a photo to this gallery
Retrieved from "https://simpsonstappedout.fandom.com/wiki/Gabbo_and_Arthur?oldid=253230"
Community content is available under CC-BY-SA unless otherwise noted.