Fruit-Bat-Man is limited-time premium costume for Mr. Burns that was released on March 14, 2013 as part of the Dark Knight Court Promotional.

It was re-released on March 10, 2015 for the Superheroes 2015 Event, where he had the ability to fight felons.

It was re-released again on June 14, 2016 for the Superheroes 2016 Event. He was made available later on the same event on July 19 once the Boss Fight was available, since he was one of the Heroes capable of fighting Pinchy.

The costume was re-released once more in the Heroes and Villains Mystery Box on July 19th, 2017 during the Superheroes Return 2017 Event. The player had a chance to win it for 60 donuts. It was available for the whole event.

He returned again on September 12, 2018 during the Super Powers 2018 Event. He was a possible prize in the Mystery Box The Sequel.

After purchasing every comic book in The Android's Dungeon & Baseball Card Shop, Mr. Burns decided to fulfill his lifelong dream of becoming a superhero. Smithers, thinking it was just a phase, went along with it until Fruit-Bat-Man went to solve a real crime. Smithers got there before him and paid Snake and Apu to let Burns win.

After this "success", Fruit-Bat-Man stopped several "villains", all (except the vicious doctor Lenny) who were paid by Smithers. Eventually, after Fruit-Bat-Man finished taking a dump, Lisa asked him for help in stopping Groundskeeper Willie, who was framing Bart for a prank, Smithers reveals that the criminals that Burns had been stopping were fakes. Fruit-Bat-Man then went to take out Willie and brought him to justice. 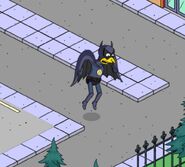 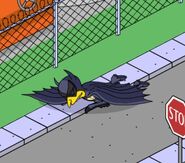 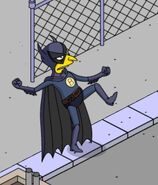 Fruit-Bat-Man practicing punching out a crook. 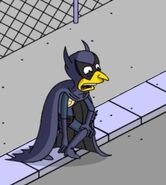 Fruit-Bat-Man winded after practicing punching out a crook. 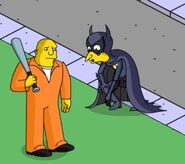 Fruit-Bat-Man in the show.
Add a photo to this gallery
Retrieved from "https://simpsonstappedout.fandom.com/wiki/Fruit-Bat-Man?oldid=246889"
Community content is available under CC-BY-SA unless otherwise noted.