Frosty the Hitman is a limited time NPC released on December 3, 2014 during the Christmas 2014 Event. He is the second prize to be unlocked during in the Winter 2014 Part 1 prize track.

One of the kid lodgers in the Simpson House was playing the game. The claws of Frosty the Hit Man are very similar to those of Wolverine from Marvel. The pose on the front of the box is similar to that of one of the posters from the movie The Wolverine. 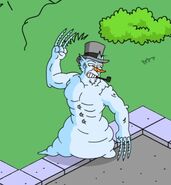 Frosty the Hitman's unlock screen
Add a photo to this gallery
Retrieved from "https://simpsonstappedout.fandom.com/wiki/Frosty_the_Hitman?oldid=255661"
Community content is available under CC-BY-SA unless otherwise noted.