Frink's Robot Dog was a limited time, premium character available during the Yard Sale Event. He has no jobs, and costs 60 donuts. When tapped on, he has an animation similar to Santa's Little Helper. 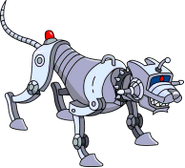 Frink's Robot Dog's unlock screen.
Add a photo to this gallery
Retrieved from "https://simpsonstappedout.fandom.com/wiki/Frink%27s_Robot_Dog?oldid=221812"
Community content is available under CC-BY-SA unless otherwise noted.