The Cost of Living

Freddy Quimby is a character released on November 12, 2014, along with the level 47 update. He is unlocked upon completion of the Quimby Compound

Freddy was charged with beating a French Waiter half to death. The court ruled in favor of Freddy because Bart Simpson testified with an eyewitness account.  Freddy was later seen when Homer barges ahead of him in line in order to file papers to run for office, but then realizes Freddy is among those in line who have to register as sex offenders.  He changed his appearance and improved his look, with a different voice (apparently, he started becoming somewhat of a law-abiding citizen, as he is his press secretary, and as evidenced in the town hall meeting that started the recall elections, he seemed willing to even call out his uncle for the crimes that he and his administration caused). 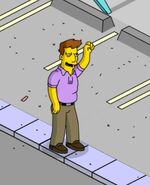 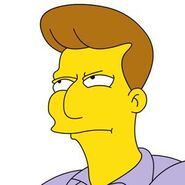 Freddy Quimby at a town meeting in the show.
Add a photo to this gallery
Retrieved from "https://simpsonstappedout.fandom.com/wiki/Freddy_Quimby?oldid=233360"
Community content is available under CC-BY-SA unless otherwise noted.